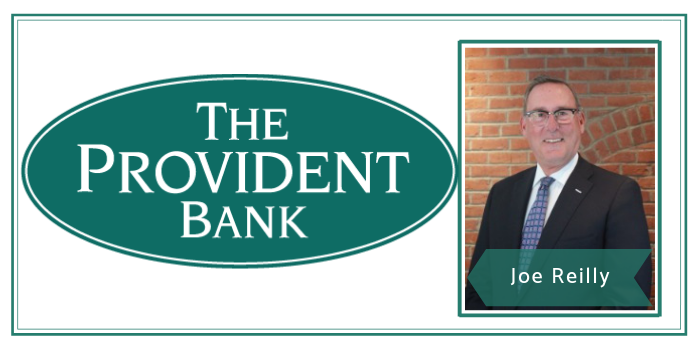 The Provident Bank is an innovative, commercial bank that finds solutions for their business and private clients. They are committed to strengthening the economic development of the regions they serve, by working closely with businesses and private clients and delivering superior products and high-touch services to meet their clients banking needs.

Mr. Reilly has over 40 years in the commercial banking industry and has served on The Provident Bank Board of Directors since 2018. Co-founder of Centrix Bank, the first dedicated commercial bank in New Hampshire, he served as the CEO until Centrix was acquired by Eastern Bank in 2014. Mr. Reilly then became Bank Regional President of Eastern Bank until he retired in 2017.

To read more about The Provident Bank and Mr. Reilly’s new role as Chairman of the Board, click here.

There are no upcoming events.

Schedule a tour to learn membership benefits and availability.

Because these cookies are strictly necessary to deliver the website, you cannot refuse them without impacting how our site functions. You can block or delete them by changing your browser settings and force blocking all cookies on this website.

These cookies collect information that is used either in aggregate form to help us understand how our website is being used or how effective our marketing campaigns are, or to help us customize our website and application for you in order to enhance your experience.

If you do not want that we track your visist to our site you can disable tracking in your browser here:

We also use different external services like Google Webfonts, Google Maps and external Video providers. Since these providers may collect personal data like your IP address we allow you to block them here. Please be aware that this might heavily reduce the functionality and appearance of our site. Changes will take effect once you reload the page.